Enthymemes in the Letters of Paul 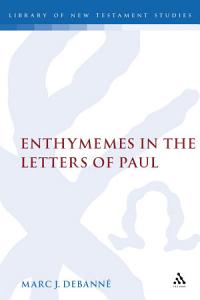 This investigation looks at Paul's argumentation with special attention paid to enthymemes. Enthymemes can be defined as a three part deductive argumentation with an unstated assumption. Enthymemes constitute an important part of Paul's argumentation which until now has been relatively unexploited. Pauline studies continues today to grapple with the question of the core of Paul's thought and the investigation of the apostle's social world is gaining interest among scholars. This study of the manner in which Paul constructs enthymemes gives us insight into his thought world and would be a valuable text for scholars and librarians.